Protecting the coastal environment in which I live and paint has always been important to me, in particular the unique water system that is the Port Royal Sound–an interesting historical fact, Port Royal Sound is the second oldest surviving French place-name in the United States having been named by Jean Ribault in 1562.

The southern boundary of the sound is Hilton Head Island and, to the north, the islands of Saint Helena, Port Royal and Parris, as well as several other smaller islands. “The Port Royal sound system is unique compared to other coastal areas in North America because it is a large embayment dominated by expansive salt marshes and an area with high salinity water. An embayment was created when rising sea levels submered valleys along the coast. The net result was and is that the Port royal Sound represnts a marine habitat that extends inland for 10 miles.” (from the Lowcountry Institutes website.) 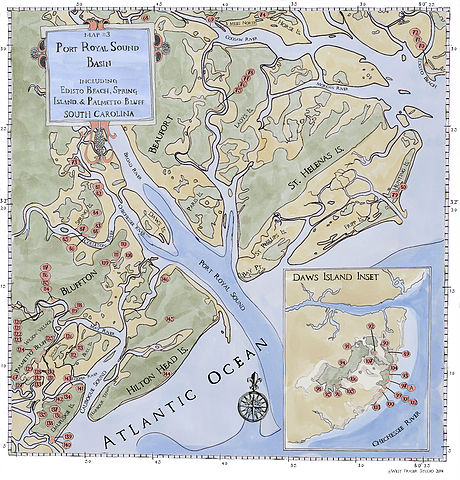 This map was created for my upcoming book, “Painting the Southern Coast: The Art of West Fraser.” The numbered red circles are color image plate numbers and indicate my painting sites.

The Port Royal Sound basin’s ecosystem is unusual in that there are no real rivers present and therefore there not many brackish marshes as in other similar basin areas. The Broad, Colleton and May Rivers are actually large salt water tidal waterways with flow from the ocean rather than from inland areas. Within this ‘marriage of ocean and land’ an environment teaming with wildlife has been created and it is because of the neessity to protect this unique environment that I have become involved with the Port Royal Sound Foundation. 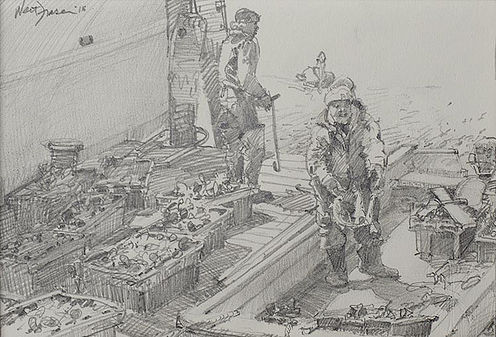 On October 31, 2015 the foundation is hosting an event with a lecture by Phillippe Cousteau, grandson of Jacques Cousteau. He has continued his families work in the protection of our marine environments and in educating us on the importance of protecting the fragile ecosystems. The even includes a silent auction and I am excited to be contributing a drawing of the bounty that comes from this magnificent area.